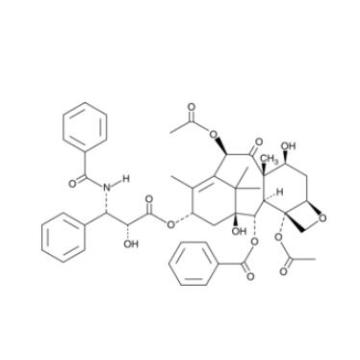 Paclitaxel CAS number is 33069-62-4, a secondary metabolite extracted from the yew plant, paclitaxel mainly acts on the tubulin system, which promotes the assembly of tubulin into microtubules and inhibits the depolymerization of microtubules. As a result, the vascular bundles are abnormally arranged, forming a stellate body, causing the spindle to lose its normal function, causing the cancer cells to die. It is mainly used for the treatment of ovarian cancer, breast cancer and non-small cell lung cancer. Its antitumor activity is higher than that of common antitumor drugs such as thiazoline, doxorubicin and fluorouracil. Because of its broad spectrum and high anticancer activity, paclitaxel cas 33069-62-4 has become the most widely used anticancer drug.
In 1963, chemists M.C. Wani and Monre E. Wall first isolated crude paclitaxel extract from bark and wood grown in the Pacific Forest in the western United States called Pacific Yew. In the screening experiments, Wani and Wall found that the crude paclitaxel extract was highly active against isolated mouse tumor cells, and attempts have been made to isolate the active ingredient by various methods. Since the active ingredient was extremely low in plants, Until 1971 that they collaborated with Duke University's chemistry professor Andre T. McPhail to determine the active ingredient by X-ray analysis. The chemical structure and named it paclitaxel Cas 33069-62-4.
The content of paclitaxel in plants is quite low. About 13.6 kg of bark can extract 1 g of paclitaxel. It takes 3-12 more than 20 years of yew trees to treat an ovarian cancer patient. The yew grows slowly and its resources are very poor. If it is used for large-scale extraction, this precious tree species will be extinct. The current biological fermentation method and the endophytic fungi cultivation method of the paclitaxel source plant are more limited, not mature enough, and are not suitable for large-scale production. Later, people studied the high-content paclitaxel precursor compound in the yew, and then chemically converted it to paclitaxel. However, the paclitaxel obtained by this method needs a lot of organic synthesis, which causes great destruction between resources and environment.
There is a new research result that has very practical application significance. It uses the leaves of Yunnan yew, which has high natural paclitaxel content. It can be obtained from the branches and leaves without obtaining chemical synthesis to obtain a large amount of high-purity natural paclitaxel. The need for health, while avoiding many of the shortcomings of traditional processes, reducing the use of organic solvents, reducing the content of impurities in the finished paclitaxel, improving the extraction efficiency of natural paclitaxel and the utilization of yew branches and leaves.