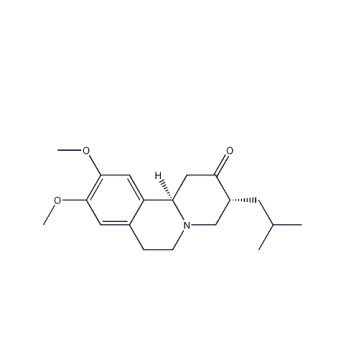 (+)-Tetrabenazine cas number is 1026016-83-0 belongs to the class of benzoquinazine derivatives and is a depleting agent for catecholamines and serotonin neurotransmitters. Clinically, it can be used to treat dyskinesia diseases such as chorea. Its prodrug, tetrabenazine, was marketed in Switzerland in the late 1950s and was originally used for the treatment of schizophrenia. After a period of clinical use, tetrabenazine was found to be a dopamine receptor blocker. It has been found that (+)-tetrabenazine has a wider range of uses, especially in terms of hyperkinesia. (+)-tetrabenazine mainly reduces the uptake of monoamines such as serotonin, dopamine and norepinephrine by reversibly inhibiting the monoamine transporter 2 (VMAT 2) of the central nervous system to produce pharmacology active. In addition to inhibiting VMAT 2,( 56440397,+)-tetrabenazine also has some antagonistic effects on pre- and post-synaptic dopamine receptors.
(+)-Tetrabenazine cas number 1026016-83-0 is a safe and effective drug for the treatment of various motor hyperactivity disorders. Compared with traditional antipsychotics, he does not cause tardive dyskinesia. However,( 56440399,+)-tetrabenazine also causes dose-related side effects such as sedation, Parkinson's syndrome, depression, insomnia, etc., but all side effects are reversible. Although he may cause some side effects, it is generally relatively safe, and the probability of serious side effects is small and well tolerated.

Usage : Tetrabenazine CAS 58-46-8 is a drug for the symptomatic treatment of hyperkinetic movement disorder