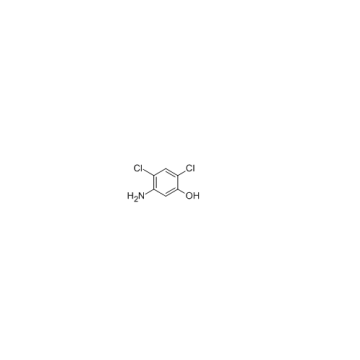 2,4-Dichloro-5-hydroxyaniline CAS number is 39489-79-7, which is an important intermediate for the synthesis of 1,2,4,5-tetrasubstituted benzene nitrogen-containing heterocyclic herbicides, such as oxadiazon, C Alkynoxanes, chloroalkyrosoxanes, and the like. These herbicides have the same mechanism of action as the diphenyl ether herbicides and are protoporphyrinogen oxidase inhibitors. Their greatest characteristics are high activity, low toxicity, and environmental friendliness. They are not only good for crops, but also have no effect on crops. They are very good herbicides. Therefore, the market prospect of 2,4-dichloro-5-hydroxyaniline CAS number 39489-79-7 is very worth looking forward to.
At present, the method for synthesizing herbicides with 2,4-dichloro-5-hydroxyaniline can not avoid the operations of diazotization, reduction, acidification and alkali precipitation. These operations have strict requirements on reaction temperature and diazotization. Both the reduction reaction and the reduction reaction must be carried out at a low temperature, and the dropping rate of the sodium nitrite solution and the control of the degree of reaction affect the formation of by-products, and also affect the following reduction reaction. The process route using sodium sulfite or sodium hydrogen sulfite as a reducing agent is relatively mature and has been widely used in industrial production, but its control conditions are numerous, the process is complicated, and the operation is cumbersome. If the pH value is adjusted to 6.5~7 with sodium hydroxide solution, if the control is not good, asphaltic by-products are formed, and the reaction temperature needs to be adjusted multiple times throughout the process. When stannous chloride is used as a reducing agent, not only the reagent is relatively expensive, the reaction temperature is low, the cooling equipment needs to be cooled, the cost is increased, and the yield is not high, and SnCl4 and SnCl2 are difficult to recover, which easily causes environmental pollution.