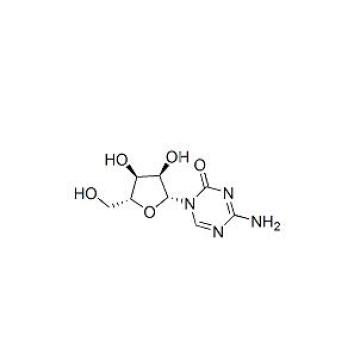 5-Azacytidine cas number 320-67-2, White to white solid. It is an antimetabolite. The primary indication is acute myeloid leukemia that is not effective with conventional therapy. Also used for breast cancer, melanoma, colon cancer and so on. It is also a potent growth inhibitor and cytotoxic agent, which plays an antitumor effect by reducing the methylation process of DNA and producing direct cytotoxicity to abnormal hematopoietic cells of bone marrow. In vitro studies have shown that 5-Azacytidine at the maximum inhibition of D NA methylation concentration, will not seriously hinder DNA synthesis. Methylation is too low can make the cell differentiation and proliferation which are closely related to the gene back to normal function. The cytotoxic effect of 5-Azacytidine cas 320-67-2 can cause rapid proliferation of cell death, including those who lose normal control of cancer cells, rather than the proliferation of cells is relatively insensitive to it.
In addition, 5-Azacytidine cas number 320-67-2 can also be used to study DNA in the process of methylation, DNA combined with molecular effects. Its toxicity is mainly manifested as leukopenia, thrombocytopenia and anemia. Other toxic effects are diarrhea, neuromuscular disorders, fever, hypotension and rash.