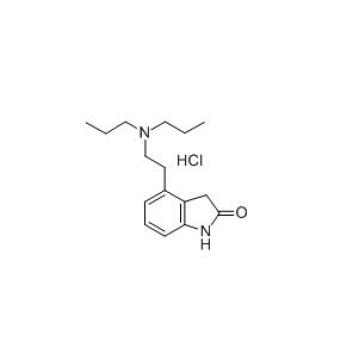 Ropinirole Hydrochloride is the dopamine receptor agonist (DopamineAgonist), to enhance the role of dopamine, correction of central neurotransmitter imbalance, relieve symptoms and maintain the patient's autonomy and activity. For the first time in 1997, it was approved for the treatment of Parkinson's disease and was approved for the treatment of moderate to severe restless legs. The use of Ropinirole in the treatment of Parkinson's disease has been patented, and only after the expiration of the patent, the generic drug manufacturer may seek permission to treat Parkinson's disease. Ropinirole Hydrochloride i oral absorption is quickly, It can reach peak after oral 1-2 hours , can be taken alone or with food. What is usage and dosage? First, from the low dose began to gradually increase to the amount of treatment, the recommended starting amount is 0.25mg each time, three times a day, and then according to the response of each patient gradually increase the dose every other week. If necessary, after 4 weeks can be on a weekly basis and then increase the daily 1.5mg, until the daily dose of 9mg, and then once again increased 3mg per day, until the daily dose of 24mg. Withdrawal time need to be slow, time to more than seven days. First in the first four days will be taken three times to twice a day, in the next three days down once a day.