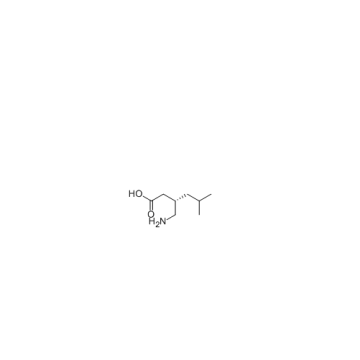 Pregabalin CAS number is 148553-50-8, which is an analog of the neurotransmitter GABA, a follow-up product of gabapentin. The mechanism of action of pregabalin is similar to that of gabapentin. It shows anticonvulsant and analgesic effects in different animal models, but the detailed mechanism of action is still unclear. Pregabalin is structurally similar to the neurotransmitter GABA, but does not directly play a role through the GABA mechanism. At the same time, this product is different from the traditional anti-epileptic drugs and does not interact with GABAA or GABAB receptors in the effective concentration range. It does not metabolize to GABA or GABA agonists, does not inhibit GABA uptake and degradation, does not act on sodium, calcium channels, and release and uptake of glutamate. At the same time, pregabalin did not show affinity with active amino acid receptors such as glutamic acid and GABA, but pregabalin could replace the binding of labeled GABA to calcium channel α2 and δ subreceptors, and inhibit the central nervous system. A subunit of the voltage-dependent calcium channel, alpha 2, δ protein, reduces calcium influx, thereby reducing the release of excitatory neurotransmitters such as glutamate, norepinephrine and substance P, and affecting GABAergic neurotransmission . In addition, pregabalin CAS number 148553-50-8 can significantly increase the level of GABA in the body, and increasing the dose of pregabalin can significantly enhance the activity of glutamate decarboxylase.
In the United States, pregabalin has been approved for the adjuvant treatment of partial peripheral seizures of diabetic peripheral neuropathy, postherpetic neuralgia, fibromyalgia, and neuropathic pain caused by spinal cord injury. In August 2003, Pfizer first filed a registration application in the United States. In December 2004, the US FDA approved the use of pregabalin for diabetic peripheral neuropathic pain (DPN) and postherpetic neuralgia (PHN). It is also the first drug in the United States and Europe (July 2004) to jointly treat two types of neuralgia; in June 2005, pregabalin was certified as adjunctive therapy for partial seizures; on June 2007 Pregabalin continues to be approved by the US FDA as the first drug to treat fibromyalgia syndrome; in June 2012, the FDA approved Pregabalin as the first drug to treat neuralgia caused by spinal cord injury.