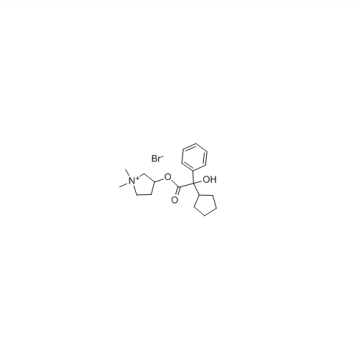 Glycopyrrolate CAS Number is 596-51-0, the appearance of white crystalline powder, odorless, bitter taste, Soluble in water, methanol or ethanol, almost insoluble in chloroform or ether. Cannot be mixed with alkaline drugs. It is a quaternary ammonium anticholinergic drug that inhibits gastric secretion and regulates gastrointestinal motility. He has stronger anti-saliva secretion than atropine, but has no central anticholinergic activity.
It is applicable to stomach and duodenal ulcer, chronic gastritis, excessive gastric acid secretion and other symptoms. The effect is similar to or exceeds that of Propantheline bromide. Intravenous or intramuscular injection can be used for pre-anesthesia administration to inhibit glandular secretion, which lasts for about 7 hours. His adverse reactions are similar to atropine. At the beginning of the medication, dry mouth or bitterness may occur, and it may be alleviated or disappeared within one or two weeks. Patients with pyloric obstruction, glaucoma or enlarged prostate are prohibited.
Glycopyrrolate bromide cas 596-51-0 inhalation powder is a long-acting muscarine receptor antagonist(anticholinergic drug) used for inhalation to relieve symptoms in adult patients with chronic obstructive pulmonary disease(COPD). It was approved in the European Union and Japan in September 2012 and has now approved listings in the United Kingdom, Germany, Norway, Denmark, Australia and Canada.
Glycopyrrolate is a daily inhaled LAMA that is used primarily as a maintenance bronchodilator for the symptomatic treatment of adults with chronic obstructive pulmonary disease. Data from the Phase III GLOW trial confirmed the safety and efficacy of glycopyrrolate 44 μg, once daily inhalation, for patients with chronic obstructive pulmonary disease in 1996. The participants in the experiment came from all over the world, but mainly from patients from European countries. It is also based on these data that the European Commission approved the sale and clinical application of the drug in September 2012.