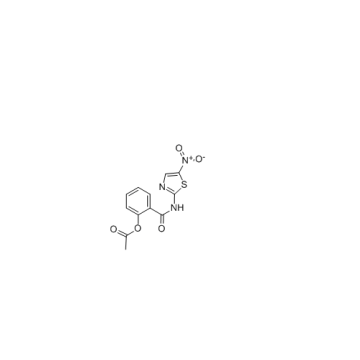 Nitazoxanide CAS number is 55981-09-4, a prodrug, is rapidly hydrolyzed into its active metabolite Tizoxanide in vivo to provide pharmacodynamic effects. Nitazoxanide was originally developed as an oral antiparasitic drug with good antigenic insect activity in vitro and in different animal models. Its first clinical study was the treatment of human intestinal mites. Subsequent in vitro and in vivo studies have found that it has a good inhibitory effect on new protozoa and Cryptosporidium. In 1998, the US FDA approved nitazoxanide as a clinical treatment for infection of Cryptosporidium parvum and Giardia in adults and children over one year of age. In 2006, clinical studies confirmed that nitazoxanide can effectively treat children with diarrhea caused by rotavirus infection. In addition, nitazoxanide has also been shown to have a good clinical effect on adult viral gastroenteritis and hepatitis C.
Nitazoxanide CAS number 55981-09-4 is a thiazole drug. In recent years, several laboratory studies have confirmed that nitazoxanide has broad-spectrum antiviral activity. A series of laboratory studies have shown that nitazoxanide can block the maturation of influenza virus hemagglutinin protein in the post-translational stage. Both influenza and influenza B have high inhibitory activity. Clinical studies have shown that nitroxazolam can effectively reduce the course of common flu by taking 600 mg twice a day for 5 days.
Nitrozolidine has an inhibitory effect on pyruvate and is active against anaerobic and microaerobic bacteria such as Helicobacter pylori, and has been reported to have antiviral and antitumor effects in related literatures. Recent studies have shown that Nitazoxanide  has the effect of increasing Aβ clearance and/or inhibiting Tau protein phosphorylation, and has the effect of improving the memory impairment of APP/PS1 transgenic AD model mice.