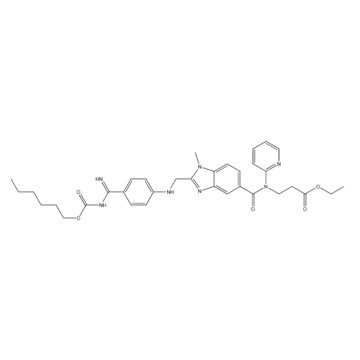 Dabigatran etexilate CAS number is 211915-06-9, a non-peptide thrombin inhibitor, is a prodrug of dabigatran that, after oral administration, is absorbed in the gastrointestinal tract and converted dabigatran which have direct anticoagulant activity in vivo. Thrombin plays an important role in the coagulation process. It is an extracellular insulin-like serine protease which, on the one hand, cleaves fibrinogen to fibrin, which participates in the formation of an insoluble thrombus matrix; on the other hand, it induces platelet activation And aggregation, which in turn lead to a series of secondary coagulation cascade reaction. Dabigatran exerts anticoagulant effects by direct inhibition of thrombin. It blocked the final steps of the clotting cascade network and thrombosis by binding to the fibrin-specific binding site of thrombin to prevent the cleavage of fibrinogen to fibrin. Dabigatran etexilate cas 211915-06-9 is the first new class of oral anticoagulant marketed after Warfarin over the past 50 years. It is orally available, potent, requires no special tests and has less drug interactions to reduce non-valvular atria Stroke risk in patients with tremor.
In October 2015, the US FDA approved dabigatran etexilate as a specific reversal agent. The availability of this drug offers a unique option for patients receiving dabigatran etexilate to reverse anticoagulation. which will further expand the scope and market size of dabigatran.

Usage: It can treat and prevent blood clots, reducing the risk of stroke.