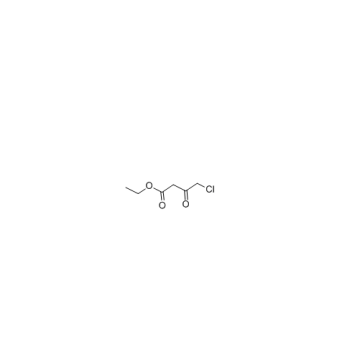 Ethyl 4-chloroacetoacetate cas number 638-07-3 is a colorless to pale yellow transparent liquid, mainly used in the field of medicine, especially the synthesis of key intermediates of oxiracetam. It can also be used in the synthesis of atorvastatin calcium and L-carnitine, so it has broad market prospects. At present, there are two main routes for the synthesis of ethyl 4-chloroacetoacetate, which are as follows:
1: Ethyl chloroacetate method. Ethyl chloroacetate is subjected to condensation reaction with benzene as a solvent in the presence of mercuric chloride to obtain ethyl 4-chloroacetoacetate. This method has only been reported in foreign patent literature, and although the conversion rate of the route is relatively high, the highly toxic compound mercury chloride and benzene are used in the route, which is high in safety, environmental protection and production cost. It is only suitable for small-scale synthesis in laboratory,not suitable for industrial production.
2: Diketene method. Use diketene as a starting material, through chlorination and esterification two steps to synthesize 4-chloroacetoacetate. The raw materials are cheap and easy to obtain and become the mainstream production method. At present, industrialization has been realized, but the inherent disadvantages of this method are the product yield is low, only 75%-88%, resulting in high cost, and the reason for the low yield is that a certain amount of ethyl 2-chloroacetoacetate (about 5%) is formed during the reaction, and The boiling point of ethyl chloroacetoacetate differs little from that of ethyl 4-chloroacetoacetate cas 638-07-3. Therefore, it is usually repeated distillation during rectification purification, resulting in a large amount of decomposition of the product, resulting in a low yield.
In order to overcome the problems of low yield and high production cost caused by the by-product 2-chloroacetoacetate in the prior art, some people have improved on the basis of the diketene method, using diketene as a starting material,through chlorination and esterification two-step synthesis of crude 4-chloroacetoacetate and then rectification to obtain a finished product, characterized in that a stabilizer anhydrous copper sulfate is added in the chlorination step in an amount of 0.02 by weight of diketene. -1%. The esterification step is as follows:after the completion of the aeration, ethanol is added dropwise, and after completion of the reaction, the dichloromethane is distilled off to obtain a crude ethyl 4-chloroacetoacetate. Copper sulphate not only acts as a dehydrating agent in the system, but also has a stronger interaction with diketene and chlorine in the chlorination process, which makes the diketene tend to be stable, which is more advantageous for the formation of the intermediate Ethyl 4-chloroacetoacetate cas number 638-07-3. This method can control the production amount of the by-product ethyl 2-chloroacetoacetate to 0.3-0.5%, and the distillation yield is greatly improved.