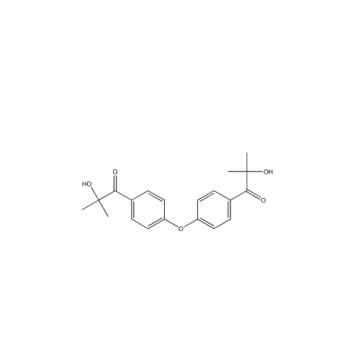 Difunctional alpha hydroxy ketone CAS number is 71868-15-0, referred as KIP 160, is a macromolecular hydroxy ketone photoinitiator with low volatility, strong migration resistance, good environmental compatibility and good resin compatibility, functional diversity and other advantages. Due to the large relative molecular mass of the Difunctional alpha hydroxy ketone CAS number 71868-15-0, the compatibility with the resin is good, the volatility is significantly lower than that of the corresponding small molecule photoinitiator, and the photoinitiating activity is equivalent to that of the corresponding small molecule photoinitiator. More importantly, due to the influence of conjugation, the absorption wavelength of the bifunctional ketone-hydroxyketone is obviously red-shifted, and the light absorption efficiency is higher. It can completely replace the small-molecule alpha-hydroxyketone photoinitiator, and the raw material is easy to use. Yes, the synthesis operation is simple. His synthesis method is as follows:
1. Take 72g of anhydrous aluminum trichloride in the reaction flask, add 139.4g of fluorobenzene, stir, and slowly add 70.9g of cyclohexylcarbonyl chloride to 10℃. After the addition, warm up to 35°C-40℃. After reacting for 2 hours, after the reaction is completed, the reaction solution is slowly poured into a 10% hydrochloric acid solution, stirred vigorously, the organic phase is separated, washed, and the fluorobenzene is distilled off, and further distilled to obtain an intermediate p-fluorophenylcyclohexyl group. Ketone 90.6 g.
2. In a three-necked flask equipped with a stirring device, a condenser, and a water separator, 24.2 g of hydroquinone, 90.6 g of p-fluorophenylcyclohexyl ketone, 20 g of potassium carbonate solid, and 250 mL of N,N-dimethylmethyl were placed. Amide (DMF) and 50mL of toluene, vacuumed, nitrogen-passed, repeated several times until the air in the bottle was exhausted, began to slowly heat up, stirred, refluxed for 4 hours, refluxed with toluene to bring out the water formed by the reaction, the reaction was completed Thereafter, the solvent was distilled off, benzene and hot water were added, and the inorganic salt was washed away. The organic phase was evaporated under reduced pressure, and then evaporated to dryness.
3. Take 71.8 g of the product obtained in the previous step in a reaction flask, add 0.72 g of N,N-dimethylformamide (DMF) and 200 ml of dichloroethane, slowly warm to 50℃, stir, slowly pass Chlorine gas, sampling and detection until the completion of the reaction of the raw materials, the chlorine gas is stopped, the residual chlorine and the generated hydrogen chloride gas are purged by nitrogen gas, and the solvent is removed to obtain 78.1 g of the dichloroketone intermediate.
4. Take 78.1 g of the above step product in a reaction flask, and add 1 g of dodecyltrimethylammonium chloride, 156.2 g of 30% sodium hydroxide solution, 150 mL of benzene, and raise the temperature to 80℃-100℃ to stir the reaction 4 after the completion of the reaction, the mixture was allowed to stand for stratification, and the lower aqueous phase was separated. After the upper organic phase was removed from the solvent, the residue was recrystallized from petroleum ether to give the desired product 72gram Difunctional alpha hydroxy ketone CAS number 71868-15-0.