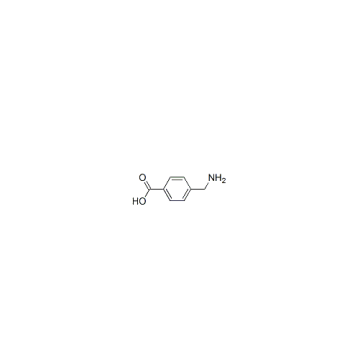 4-(Aminomethyl)benzoicacid CAS number 56-91-7, appearance of white crystalline powder, 4-(Aminomethyl)benzoicacid is a hemostatic drug for various bleeding caused by primary fibrinolysis, and at the same time can effectively prevent And pigmentation to improve skin tone, so it is also widely used in whitening skin care products. 4-(Aminomethyl)benzoicacid  CAS 56-91-7 is widely used in surgery, internal medicine, hemorrhage caused by hyperfibrinolysis, suitable for abnormal bleeding during surgery such as lung, liver, pancreas, prostate, thyroid, adrenal gland, obstetrics and gynecology and postpartum hemorrhage and tuberculosis hemoptysis, Sputum with blood, hematuria, prostatic hypertrophy, upper gastrointestinal bleeding. At the same time, it is also the main raw material for the preparation of another widely used hemostatic drug, tranexamic acid. Because of the significant effect of ammonia-toluic acid on hemostasis, the side effects are slight, the safety of medication is high, and the market demand is large.
The stereo configuration of 4-(Aminomethyl)benzoicacid CAS 56-91-7 is similar to that of lysine, which can competitively inhibit the adsorption of plasminogen on the fibrin network, thereby preventing its activation, protecting fibrin from degradation by plasmin and achieving hemostasis. The role of protecting platelets in circulation, reducing postoperative bleeding and blood transfusion, and the postoperative treatment period can significantly reduce the recurrence rate of patients, and the clinical effect is good.
4-(Aminomethyl)benzoicacid  is a procoagulant drug that prevents plasminogen from being activated as plasmin by inhibiting plasminogen activator. Clinically, it is mainly used for bleeding caused by excessive dissolution of primary fibrin, including acute and chronic, localized or systemic high fibrinolysis. In recent years, with the deepening of clinical pharmacology, its application range has been expanded, and experimental research has proved that it can also be used for the treatment of allergic purpura, with a total effective rate of 93.5 %. In addition, it can also treat allergic skin diseases with total efficiency. 92.6%, the mechanism may be inhibition of plasminogen activator, so that plasminogen can not be activated to plasmin, thereby inhibiting fibrin dissolution, stabilizing complement, preventing and reducing fibrin decomposition products, and preventing kininogen conversion It is also a kinin; in addition, it can also be used to treat psoriasis, which contains plasminogen activator in the scales of psoriasis, which inhibits plasminogen activator in the scales and epidermis of psoriasis, The plasminogen can not be activated as plasmin, which can control the development of psoriatic lesions, with a total effective rate of 94.4%. In addition, it can also be used to treat terfenadine in the treatment of chronic urticaria. Dermatitis and traumatic secondary anterior chamber hemorrhage can also be used to treat autoimmune disease pemphigus, and the mechanism may be related to its inhibition of fibrin degradation products