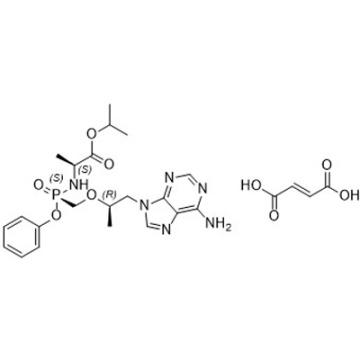 Tenofovir Alafenamide (GS-7340) CAS Number 379270-38-9 is a novel prodrug for tenofovir, mainly used for the treatment of HIV infection and hepatitis B virus infection, It is a renewed generation of tenofovir prodrugs than Tenofovir disoproxil fumarate. Clinical data shows that it is 10 times smaller than the dose of tenofovir disoproxil fumarate and has similar ability to clear the virus, and have higher safety and tolerance. At present, the four drugs for the treatment of AIDS included Tenofovir Alafenamide (GS-7340) CAS Number 379270-38-9 has been approved by the US FDA. In addition, the unilateral with Tenofovir Alafenamide (GS-7340) as the active ingredient of hepatitis B treatment drugs in 2016 was approved by the US FDA listed,so far it is considered to be the best treatment of hepatitis B drugs.. There are three main ideas about its synthesis, the first is use iethyl phosphite as raw material, after condensation and esterfication with paraformaldehyde to get the relevant intermediates and then by 6 steps to get the target product, this method is cumbersome, the Yield is not high. The second idea is using diphenyl phosphite as raw material, after condensation with chloromethyl benzyl ether, and then by hydrolysis, chlorination, condensation, separation, deprotection, esterification and get target products, this idea needs to use precious metal catalytic hydrogenationused to reach deprotection conditions ,it has high requirement on the equipment. The third idea is to directly with tenofovir as the starting material, first take heating reaction with the chlorination reagent to obtain PMPA-2CL, and then through the one-pot method and take reaction with phenol and L-alanine isopropyl ester to get the crude target product, due to tenofovir is very mature in market, the price is relatively low. We think use it as starting materia is more feasible. 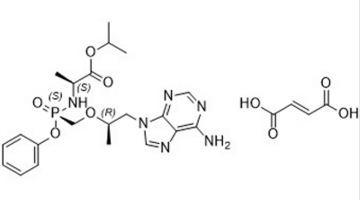